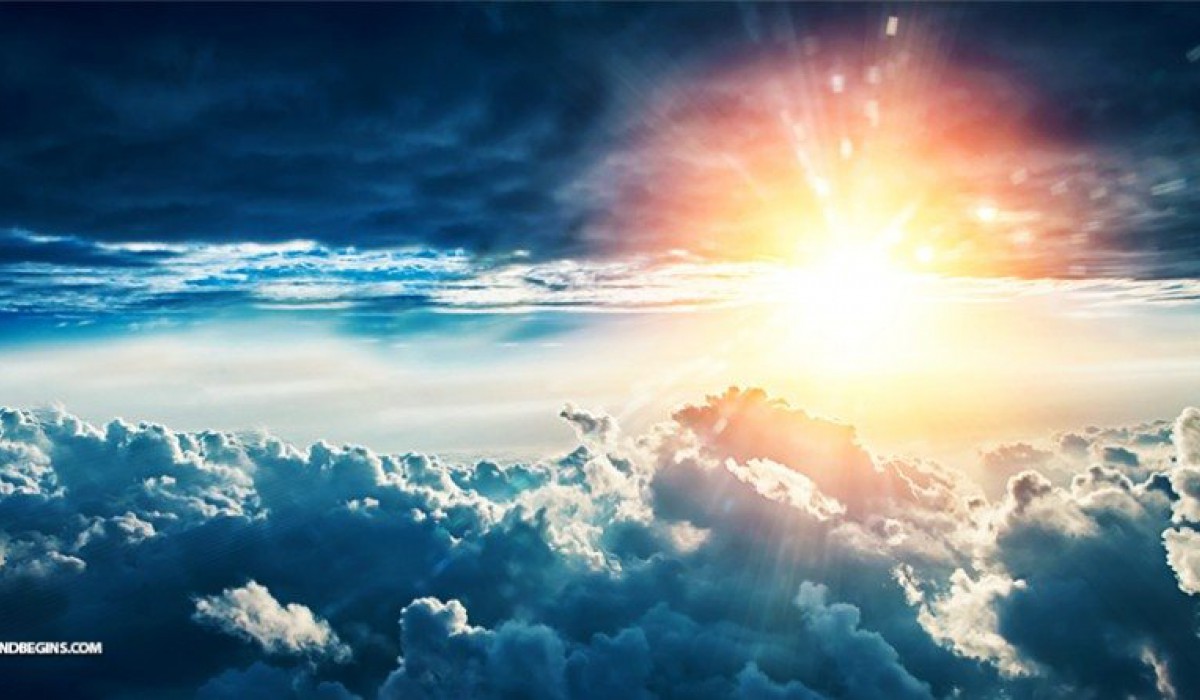 The Portals of Heaven

A portal (in layman’s terms) is a doorway or entry point. According to the Bible, it is a spherical opening of light that offers divine protection through/by which angels and heavenly beings can come and go without demonic interference. God has designed portals to originate in the third heaven, travel through the second heaven, and open upon the earth.

Examples of Portals in the Bible

23Yet he gave a command to the skies above and opened the doors of the heavens; 24He rained down manna for the people to eat, He gave them the grain of heaven.

When the Israelites needed food, God provided manna. Demons couldn’t stop it because God opened a portal in heaven and the manna came through it; this is why it is also referred to as angel’s food. No one was sick or weak for 40 years because they were eating manna (food prepared for them in heaven). But God had to make sure that the food came through a channel that was not tampered with, so God opened a portal in heaven and delivered the food to the Israelites through it.

On his way to Harran, Jacob (Gen 28:10-18) needed to rest one evening, so he took a stone and lay his head on it to sleep. Jacob knew that if he became too comfortable sleeping, he might not be able to wake up. He understood that he had a journey set out before him, so he endured discomfort. And it was in that discomfort that he had a dream (v12). Every discomfort in your life is designed for you to have an encounter with God. If you don’t know how to treat your discomfort, you will not perceive that it is a set up for you to draw near to God.

Every discomfort is a place of encounter.

Jacob saw a portal in heaven (open) and the angels were ascending and descending upon this staircase. If angels were ascending, this shows us that angels are already here: that the angels of the Lord already walk with us. They ascend with your prayer and descend with your answer. When Jacob was lying there, his heart’s desire was being transferred to heaven. The Bible says that God was standing in the ‘doorway’, above the stairs (v13), meaning that God was guarding the portal. God looked down and saw Jacob, and He started to communicate with him. When Jacob woke up, he said: ‘Surely, the Lord is in this place, and I was not aware of it’ (Gen 28:16). It is, therefore, possible for you to be in a place where the Presence of God is and not feel or perceive it. The next morning, Jacob took the stone that he had used as a pillow and marked the place, because he knew it was an open portal. He didn’t want to forget where the open portal was, so he put a stone there and put oil on it, referring to that place as ‘the gate of heaven’ (v16).

Open portals exist in the New Testament too. A door (portal) in heaven was opened for John to have a revelation of the end times; the same type of portal traversed by angels and Jesus himself. John explains in Revelations: “after this I looked, and there before me was a door standing open in heaven. And the voice I had first heard speaking to me like a trumpet said, ‘Come up here, and I will show you what must take place after this’ ” (Rev 4:1). John was told to ‘come up here’, but how was he meant to do that? Through a portal: the door was open, and he was invited to ‘come up’. There are portals in heaven that are open, but man can activate these portals (e.g. Jacob’s experience).

Jesus told Nathanael that because He had prophesied, Nathanael believed, but that even prophecy is a small thing when compared with what was to come (John 1:47-51). He then added, “Very truly I tell you, you will see ‘heaven open, and the angels of God ascending and descending on’ the Son of Man” (John 1:51). Previously, in the experience of Jacob, angels were descending upon the earth. With Jesus, they were descending upon Jesus! That’s the difference. Jesus brought with Him a new dimension of portals: it would no longer be something limited to one place only, it became something that was (and is) open upon Him, and so Jesus moves with an open portal. Wherever He goes, He commands an open portal. Wherever He walked, during His time on earth, the heavens were opened because the portal was on Him.

The purpose of Jesus’ coming is for us to carry an open portal wherever we go.

Portals are openings in heaven that reach earth at specific locations in order for there to be angelic activity. But with Jesus, it was not targeted at a location anymore, but rather on a Person. Jesus came to replicate Himself, so that we could be like Him. The purpose of Jesus’ coming is for us to carry an open portal wherever we go. When we arrive at a place the atmosphere changes and we sometimes may not understand why it changes: it is because we are carrying an open portal.

How Can a Portal Be Opened?

At the Jordan, the Bible says that the moment Jesus came up out of the water after being baptized ‘heaven was opened’ (Matt 3:16) because Jesus was obedient. Jesus went through a baptism of repentance even though Jesus wasn’t a sinner who needed to repent. However, His Father told Him to do it, and He obeyed. Obedience has nothing to do with what you want to do, when you want to do it, or when things are going well; obedience usually involves what you DON’T like doing. Jesus Himself did not want to go to the cross. In Matthew 26 Jesus askes His Father to take the cup from Him. If Jesus Himself said, ‘My Father…not as I will, but…Your will be done (v39-42),’ then what was the will of Jesus? His will was not to go to the cross. Jesus didn’t like what He was being asked to do, but because His Father said so, He did it. This absolute embodiment of death to self is what it truly means to be ‘obedient to death - even death on a cross!’ (Phil 2:8). Because of this, God highly exulted Jesus and gave Him a name above all names. Be encouraged knowing that every time you are in obedience, exultation is coming.

Once a portal is open on earth, it is permanently open. There are particular places/locations on earth where open portals can be accessed, to name a few Biblical locations:

The river Jordan: this portal is permanently open. When the water was split and the Israelites crossed the Jordan (Josh 3:11-17), the portal was opened. John knew this was an open portal and this is why he baptized people there and nowhere else. This is also why Elijah took Elisha to the Jordan (2 Kings 2:8,14). To hand over the mantle, he had to take Elisha to a portal. They went to the Jordan, and Elijah divided the water (just like it was divided long before), they walked through the Jordan, and as they did, a chariot of fire took Elijah up to heaven, and his mantle fell to earth. Before Elisha took up his new mantle (Elijah’s cloak) at the Jordan, Elisha tore his own garments, because you can’t put on anything new unless you are willing to give up the old (death to self).

You can’t put on anything new unless you are willing to give up the old.

The city of Jerusalem: it is in Jerusalem, on the Mount of Olives, that Jesus ascended into heaven. Jesus was looking for a portal, and this is why He stood on the Mount of Olives. An angel said that the way Jesus left, is the same way He will return (Acts 1): the portal is still open. Many of us wonder why there is so much strife over this city, and it is because of the open portal. The devil knows that there is a portal there and that Jesus will return at that location. The enemy thinks that if he can access/control the portal, Jesus won’t return. But He’s coming back no matter what! It is just a matter of time.

Mount Moriah (Temple Mount): Abraham’s obedience commanded a portal to be opened on Mt Moriah. When Abraham went to sacrifice Isaac, the Bible says that an angel of the Lord stopped him because the Lord saw his obedience (Gen 22:11-13). From that moment onwards, an eternal portal was opened.

Consider that demonic portals also exist and need to be avoided. We need the eyes of the Spirit to be able to identify them and decide not to go there/enter in.

You must know, that which the devil is contending over in your life is a portal. When Jesus came, He changed everything! Portals were no longer restricted to specific locations, but now, we can be carriers of heavenly portals.

“ 1When the day of Pentecost came, they were all together in one place. 2Suddenly a sound like the blowing of a violent wind came from heaven and filled the whole house where they were sitting. 3They saw what seemed to be tongues of fire that separated and came to rest on each of them”.

The portal was established upon the disciples’ heads that day. That’s why when Dorcas died, there were many believers in the area, but they waited for Peter because they knew that he was a man who carried a portal. Peter walked in with something upon his head! He sent everyone from the room, knelt, prayed, and told Tabitha to ‘get up’, and she rose from the dead (Acts 9:36-40). When Lazarus died (John 11), other believers were present but they didn’t carry a portal. They waited for Jesus. Jesus asked where they had buried Lazarus (John 11:34). Once Jesus knew where to go, He would transport the portal there because He was walking with it. When Jesus came to the tomb, He lifted up His head (looking up at the portal), and thanked His Father. When He had finished, He turned to the grave and called in a loud voice, “Lazarus, come out!” (v43). It was physically impossible for Lazarus to come out of the grave due to his tightly wound grave clothes. But when Jesus spoke, the glory of the Lord was in His voice, and it catapulted Lazarus from the grave to directly in front of Jesus. Power didn’t raise Lazarus from the dead; it was the glory of God.

There is an open portal upon the life of Christ. When Christ lives in you, He comes with a portal. But you won’t be able to access it within the kingdom without revelation. The moment you start to become aware, it starts to work. Knowledge attracts activation, activation attracts power, and power attracts the glory.

We are in the time of glory! If you believe, you will see the glory of God!

Watch the sermon video The Portals of Heaven

Previous Article Shekinah Glory
Next Article The Presence is a Person