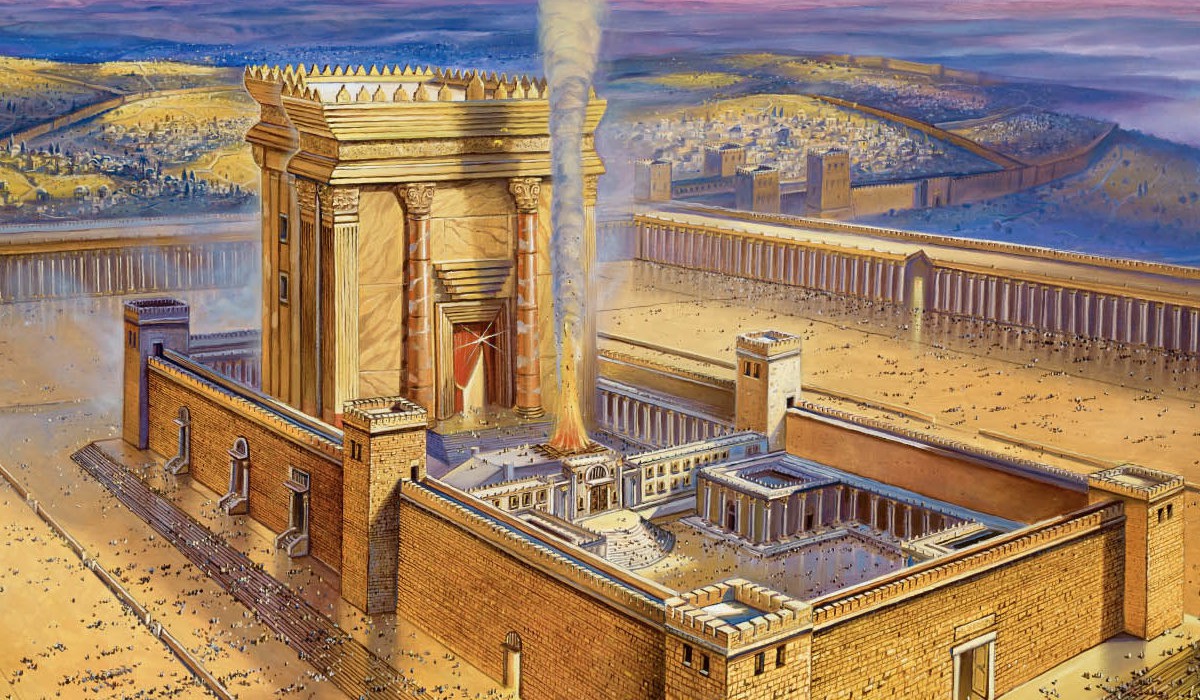 'Some of His disciples were remarking about how the temple was adorned with beautiful stones and with gifts dedicated to God. But Jesus said,
“As for what you see here, the time will come when not one stone will be left on another; every one of them will be thrown down.”
“Teacher,” they asked, “when will these things happen? And what will be the sign that they are about to take place?”'
[Luke 21:5-7 New International Version (NIV) | Full readings: Luke 21 | Matthew 24]

After the disciples pointed out the beauty of the temple, and Jesus said that it would be destroyed, they asked Him two questions:
1) When will this be (related to the temple)?
2) What will be the sign (of the end times)?

In the course of Jesus’ answer, He also offered many relevant insights into the end times. In short, Jesus pointed to Israel as the greatest sign that people should look to (i.e. Israel as the ‘clock’), and that one key within Israel would be the events surrounding the temple.

History[1] on the Temple of Jerusalem

There have been two temples in the nation of Israel:

1) The first temple: In Deuteronomy 12:4-7 God told the Israelites that He would meet them in a specific place. This ‘place’ was built by Solomon because David had too much blood on his hands. It was this temple that replaced the tabernacle constructed under Moses (the original place of meeting). The first temple was destroyed in the year 586 BC by the Babylonians.

2) Then, the second temple was built in the book of Ezra. Its construction was ordered by Cyrus in 538 BC after the fall of Babylonian (Isaiah 45). This new temple was dedicated by the Jew, Zerubabbel.
(Scripture references: Haggai 1:15. Ezra 3:8-10)

Many events occurred after the construction of the second temple. At a stage, Jerusalem was ruled by the Nations. A King named Antiochus IV Epiphanes (who commanded the end of the sacrifices, the Shabbat, and other Jewish festivals) ordered the construction of a statue in the temple (Zeus), and Hellenic priests started offering pigs on the altar. Then in 167 BC, the Jews rose up against this and Mattathias (an Israeli leader at the time) won victory over those who were desecrating the temple. The Feast of Hanukkah marks the time that the Jews conquered and took back their temple.

Battles ensued after that again and throughout time Israel has been ruled by many nations. When the Romans came (under Pompey) they also desecrated the Holy place of God, and the temple had to be renovated again (63 BC). Herod renovated the temple then named ‘Temple of Herod the Great’ (or Herod’s temple), and this is the version of the temple that Jesus was talking about in Luke 21; the same one destroyed in 70 AD.

When the Romans captured the city in 70 AD and many Jews were killed in an effort to protect the temple. Just over 60 years after the temple was destroyed, a Muslim man by the name of Simon Bar Kokhba revolted against Rome in an attempt to capture Jerusalem (132 AD). Then Rabbi Akiva wanted to rebuild the temple but failed, and at the time, the Jews were banned from Jerusalem. Later, the emperor Julian allowed a temple to be built, but his plans failed because of the Judean earthquake that took place.

Ultimately, under Islamic rule, it was ordered that the dome be built: this is the Mosque that was built on the temple Mount. What is interesting to note, however, is that the Dome of the Rock was built in what we call the outer courtyard of the temple, and not in the Holy of Holies thus fulfilling scripture where it says: ‘let the outer court be trampled upon by the nations’ (Revelation 11:1-2). And so, al-Aqsa Mosque stands today in that very place.

Why is the Temple so Important?

The temple is a symbol of Judaism. For the Jews, if there is no temple, there is no religion. This forms the very basis of the reason why the Jews want to rebuild the temple.

In addition to this, according to Judaism, when the Messiah comes He will enter by standing on the pinnacle of the temple. From there, He will jump down and redeem the nation of Israel. The reason why the devil took Jesus to the pinnacle of the temple during his 40-day temptation, was because Satan was aware of this prophecy among the Jews. Satan was tempting Jesus to fulfill the prophecy so that the Jews would accept Him as their Messiah. Jesus, however, knew that Biblical prophecy indicates that the Messiah will return on the Mount of Olives, not the temple. So it was a deviation of the prophecy that Satan tried to get Jesus to fulfill.

We are currently living in times when there is talk about a third temple, and whether or not it will be rebuilt. Biblically speaking, there needs to be an event that will allow the rebuilding of the temple because ‘the man of sin’ (aka the antichrist) has to enter the temple and proclaim himself god (2 Thes 2:1-17). And so we find ourselves at a pivotal point in the history of mankind. Right now, Israel is preparing for the rebuilding of the temple. The Israelites have not only trained the priests that will carry out the work in the temple, but they also have a genuine-sized menorah that has been restored, and they are just waiting for the temple to be rebuilt for the menorah to be placed inside. Last year (2019), during the Passover, there was a public event in Israel involving a rehearsal of the Levites doing the daily sacrifices, yet further evidence of their desire to rebuild.

As things are right now, if the Jews try to build the temple, there will be war. But there will come a time when Jerusalem will be under the control of the world government, and that is when the decision to rebuild the temple will be made. All of these events, along with the peace treaty, will usher in the rebuilding of the temple.

The Man of Sin Revealed

Once the temple is rebuilt, the man of sin will be revealed. The antichrist will arise and control the whole world. Soon the world will cry out for one-world government because we see even now how the public is criticizing governments for not being able to handle crises (like this pandemic). The governments are losing power, and this may lead to people asking for the world to be ruled by one leadership body; a one-world order powerful enough to anticipate and manage global disasters and rule the nations. .

A Call for Preparation

The virus is not the end of the world, but a forerunner to it. Jesus speaks about the pestilence: a deadly plague that affects the community. This (the Coronavirus pandemic) is the first time since Jesus’ ascension that a plague has captured the entire world. Never in the history of mankind have we come to the fulfilment of Biblical prophecy like this related to plagues. The Bible also talks about the roaring of the sea (tsunamis and earthquakes). These are all the beginning of the labour pains, but it is not the end, it’s only the beginning.

Now is a time for the church to PREPARE. Are we really ready for what lies ahead? Align yourself with the Biblical timeline of prophesies referring to the upcoming tribulation and persecution of the church. Church gatherings will be stopped by the rule of the antichrist, not sickness. This plague won’t be the last plague we see before Jesus returns so we can use this opportunity to learn how to handle similar future matters. The real persecution will come in when the man of sin arises, because the antichrist will use the one-world order to target Christians, block every message and person who talks about Jesus as the Messiah, and shutdown Christian gatherings because the whole world will be forced to worship the beast. Are we truly prepared for this?

In spite of intense persecution, the Bible promises us that the antichrist will not overcome the church. He will wage war on the saints, but God will protect His church (His elect) in the day of the antichrist. So take heart, beloved! “When these things begin to happen, look up and lift up your heads, because your redemption draws near” (Luke 21:28, NKJV).